Are you a wedding photographer in need of some inspiration and a bit of a recharge? Do you dream of shooting high end destination weddings?

Come and join me in Ibiza for a  bespoke 2 day private photography intensive coaching course.  Let me help you create a successful high end photography business by addressing your specific needs.  The course is tailored to cover specific points that will be most powerful and effective for your business.  Have a look at the available topics or make use of a complimentary discovery session to find out how this photography intensive can help you achieve your dreams.

As a certified coach and a successful international wedding photographer I am uniquely positioned to help you take your business to new heights, build your confidence and fast track your path to success.

If you have any other questions please contact me here.

Hilary & Ben flew out to Ibiza along with several suitcases of clothes, although to be fair that should actually be several suitcases of dresses…there’s definitely just one fashionista in this relationship. Although they went to the same university, it wasn’t until the couple actually found themselves working in the same company, in the same department, that Hilary & Ben actually found that they were the perfect match. And as Hilary is Chinese, it was also confirmed in the stars….. in the readings of their respective horoscopes to be more precise. This lucky pair have a match that comes around just once every 11,000 years apparently. The phrase ‘meant to be‘ is an understatement……

Here’s a preview of just one part of their shoot (I did say there were lots of dresses!) and I’m excited to share more soon. Ibiza is a magical place and it’s truly wonderful to be able to welcome my wedding clients out here, and create beautiful photographs that celebrate their love…. this sweet pair were utterly lovely, and I can’t wait for their wedding later this year…..

Ibiza Portrait Shoots start at £395 and the weather’s great right all the way up to the start of November so if you feel like hopping on a plane, drop me a line!

The beautiful Asiye pregnant with her third child at 7 months, shot on film in Ibiza. And a few behind the scenes shots too….thanks to Sonja for your help with blankets, styling and laughter…. and most importantly welcome to the world sweet Zya-Lou….xxx 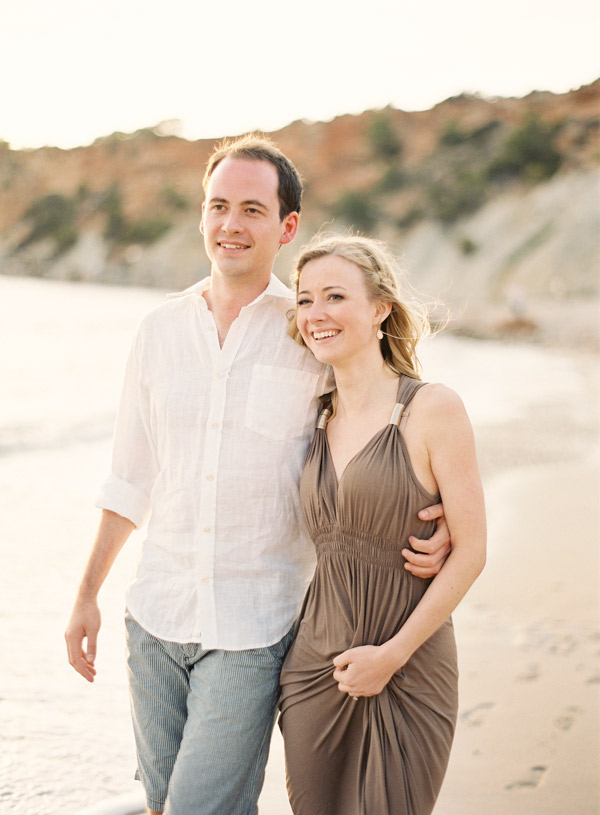 I hope all you English readers are having a lovely Bank Holiday this weekend….although I am in Ibiza this week and so technically it’s not a bank holiday today, I can’t resist kind of half taking the day off…. so after a Pilates class, some greek yoghurt with super manuka honey and a flurry of emailing and blogging, I’ll be off to work on a DIY project repainting some drawers for my new art studio. I also hit the garden centre this weekend (how very Bank Holiday!) and I’ll be rearranging my lemon and lime trees, lavender and rosemary around the studio. There’s been so much going on here lately behind the scenes and I am excited to share more soon. There’s a beautiful new look coming and an exciting new project too…. but for now, here’s a little taste of Ibiza with some more images from Ronni & Matt’s Pre Wedding Shoot last summer. Happy 1st Anniversary to this lovely couple!

“We just looked at the photos with a glass of burgundy wine and candles, and frankly, I don’t think we can really express ourselves now properly.. so apologies in advance!
The gallery is on a different level and totally beats anything we have ever imagined even in our wildest dreams, and even knowing that you are a magician!!
We are only starting to realise that this is such a memory for the future, but what we clearly realise is that things happen for a reason. We had a fabulous time with you in Ibiza old town and today, 6 weeks from that day we are ridiculously happy and feeling truly truly lucky that our roads crossed and that you will be there on our most special day!
What is clearly obvious is that you are just a legend and your talent is striking!”

This may seem like an unusual story and it’s definitely one of the most original I have heard for sure, but like all good fairytales it has a happy ending. The couple met on a group holiday in Kenya where Johnny persuaded Renata to come out on a jetski ride with him. However Johnny *may or may not* have gone a little bit fast and consequently Renata was thrown from the jetski into the shallow waters. She stepped on the seabed to catch her footing and “ouch!” immediately trod on a sea urchin that immediately shed over 40 spikes into her foot. So it was off to hospital to have them removed. Feeling slightly responsible for her fate, Johnny arranged to take Renata for dinner in London a few weeks later, by way of apology. Except that this was a little more than an apology as rumour has it Johnny actually booked several restaurants for this rather special date…… finally opting for dinner at Daphne’s. The connection was immediate and soon blossomed into a beautiful romance. Despite living in different countries, the couple took it in turns to fly to each other for the weekend so they could be reunited each week.

This summer they will officially become husband and wife, and I’ll be capturing their love on the day they are united forever…..

is a wedding & portrait photographer capturing love, joy and celebrations in beautiful places all over Europe. Based in Ibiza and London, Polly provides a beautiful and artistic approach to photography, creating images that are elegant, emotional and natural.